You are here: Home / Archives for TULIP

TULIPS, as we all know, is a wonderful flower giving inspiration with its awesome colors and look. This flower shape is used as a power bank to produce power. This article briefs about the latest trend in the solar power creation and its related usage. 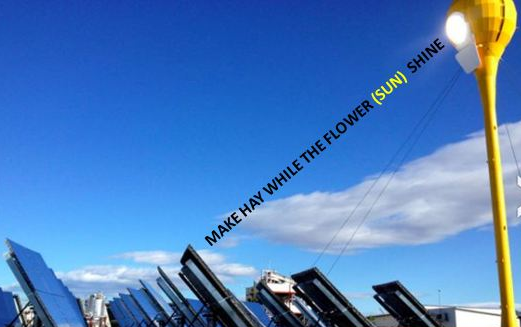 The latest nation to enter the list for controlling carbon emission is Ethiopia. The nation’s mission, to make itself a carbon neutral nation by the year 2025, is now getting a new face of creating power source. Ethiopia has sourced AORA SOLAR, to make a solar power generator. AORA SOLAR is a company, which produces hybrid solar systems. The Company developed a power plant in the shape of TULIPS.

This generator in the shape of flower consists of a high tower. This tower has mirrors embedded on it. The mirrors are positioned in such a way to track the sunlight that they send the rays up to the top of the tower. The top of the tower is shaped as TULIP’S petals. The flower shape consists of water storage areas inside it. However, continuous heating of the water makes it boil and produces the steam. The steam produced is in turn used to power a turbine generator and with the help of this generator electricity is produced. Each plant is capable of producing around 100KW of power. This amount of power is enough to give electricity for 60+ homes. Apart from this electric power generation, the generator also produces heat energy at the rate of around 170KW. The specialty of this generator is that it works under any climatic condition on a wide variety of fuels like diesel, LNG, biogas, natural gas apart from sunlight. The added advantage of this TULIP power generator is it uses less amount of water to propel the turbines. When compared with concentrated solar power technology, only around 8% of water is enough to run the turbine in this method since it also uses hot air to do the rest. The trendiest part of this power generation system is that it can be commissioned as separate units and each having the capacity of 100KW which can be interconnected. The separate unit feature allows the company to install the set up phase by phase. During maintenance for any one of the units, the power generation will be continuous since the other one is functioning. The function of such solar power plant is mentioned below.

After a father was brought to justice for spanking his 8 year old son, a New York court rouled that it's ok for parents to spank their children. A decision last Wednesday from the state Appellate Division found that the spanking "was a reasonable … END_OF_DOCUMENT_TOKEN_TO_BE_REPLACED

The actor Dwayne Johnson's is keeping up for his nickname "The Rock" on preparing for his latest movie Hercules. To build up significantly more to play the child of Zeus, Dwayne undertook an unfathomably compelling workout administration and … END_OF_DOCUMENT_TOKEN_TO_BE_REPLACED

After the disdainful picketers set their eyes on a P!atd show, Brendon Urie & co. discovered a creative approach to battle back Westboro Baptist Church—the gathering of scorn mongering dissenters who have focused on everybody from Lorde to Brad … END_OF_DOCUMENT_TOKEN_TO_BE_REPLACED

The wristwatch has been perpetually reinvented, however this new innovative tackle the extra dump a vital segment of most watches: the face. The Ritot watch, which resembles a wellness band, ventures the time from the side of the gadget onto the … END_OF_DOCUMENT_TOKEN_TO_BE_REPLACED

Man discovered the use of power and has been utilizing it blindly. Almost everything is dependent on power – our food, transportation, communication, entertainment and the list is endless. We can’t think our lives without power but it is dreadful to … END_OF_DOCUMENT_TOKEN_TO_BE_REPLACED